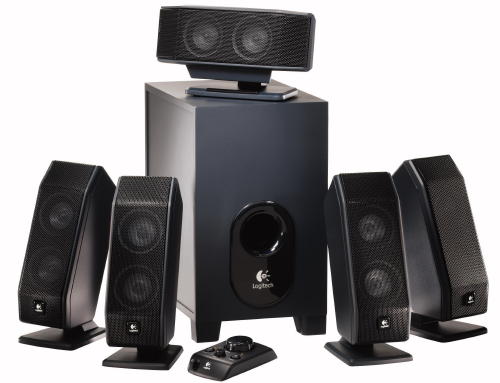 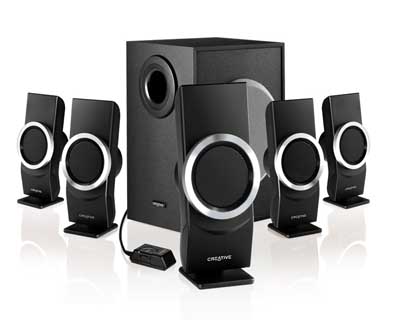 When I was looking to buy my first 5.1 channels speaker system, I considered those 2 models primarily. At that time, the Logitech X-540 was not yet available in Mauritius, and I had to opt for the Creative Inspire M5300 which was priced Rs.2700 (~$90). Well, for this review I’m not going to bother you with figures and whatnot. I’ll just tell you about my testing results. For both setups, I placed the 2 back speakers on a wall behind me, the front and centre speakers were on my desk in front. The speakers are powered by a Creative SoundBlaster Audigy SE 5.1 capable soundcard.

The M5300 came in well packaged, the woofer in polystyrene (that white snowy stuff) and the individual 5 speakers were in their own box, each wrapped in plastic. Overall, the presentation looked good. Hooking up the speakers were no big deal. The cables are NOT colour coded, but they have those small tags which you stick to the jacks. The 3 line-in wires are hard-wired in the woofer (front, rear, centre/sub wires). The set also comes with a small volume controller which is quite useful. Note that the bass control is placed behind the sub, where the wires are plugged, so it’s hard to reach sometimes. Specially if you need to crawl under your desk.

Also, the wires that connect the rear speakers to the woofer were a too short for my room. I don’t have such a big room, say around 2 metres wide. I have to admit that I ran those wires through trunking in the walls so it reduced the length a bit. But still, even if I left them trailing on the floor, they hardly reached the woofer from the back wall. I had to get extensions, which were around Rs.50 (~$1.5) each for the 2 back speakers. Overall, connecting the speakers was not difficult.

I had my card setup for CMSS (Creative MultiSpeaker Surround) or something like that which takes a 2 channel stereo in and replicates it on all 5 speakers, creating a fake surround from 2 channels audio. It’s an in-built function for the SB Audigy and works superbly. That’s how I tested for music.
Creative Inspire M5300: The Tests

For music, the M5300 performed ok. The individual speakers were alright in all ranges, despite there being a noticable hiss when there was no music. At high levels, the sound gets kind of distorted which is not pleasing, but at those volumes, your neighbour would probably be shouting as well. The bad thing was: the bass. It really, I mean really, … sucked. I don’t know why, but it was really artificial-sounding. It was a whirrr-sound instead of the thomp-thomp you want. It was as if something in the woofer was spinning, instead of hitting. It was kind of bizarre. I can’t say I was pleased with the bass quality. Also, the volume control has one of those old-style cogwheel controls. Nothing except that and an indicator LED. It was incredibly light with no anti-slip foot or anything. It looked… cheap.

Regarding the movies, the M5300 really didn’t impress me. LoTR 2, specially the ending part with the Urukai army rushing and all sounded flat. I blame that on the bass. It was not lively at all. The surround effects were not very impressive, as if the back speakers were not loud enough. I didn’t get the impression of being immersed in sound. Even for Die Hard, the explosions were not that hard and amazing. Again, I blame the bass.For the games, which are first-person shooters, positional audio was something big. The M5300 did have some effect here, although hardly noticeable. For this, I blame the rear speakers. They are WAYYY too soft. I could hardly hear a thing from them. To get a good volume, I often had to crank up the volume as high as 75% to get something good out of them. But frankly, I didn’t feel the enemy behind me. The shots were not wheezing past from my back. The Locusts were not shouting realistically. And Alma was not frightening. Not impressive.

After all those cons, something happened and made me change my mind to go and get a Logitech X-540. The M5300’s woofer stopped working. It emitted no bass at all, even with the bass knob at full. It came and went, and sometimes emitted a gurgling sound. As if something got stuck inside and refused to move. I tried opening the woofer to check inside, but the circuit board had a soldered wire to the woofer, and refused to come out. I could not see what was inside to possibly solve the issue. That was its death-knell. I replaced everything in their box, and stuffed them somewhere.

Next on my target was the Logitech X-540 which had been receiving very shiny and positive reviews. I wanted those. I phoned Kaira (the Logitech distributor in Mauritius) but they didn’t sell to individuals. I was referred to a BNL Trading, where I got my set, in case you want one too. Price? Rs.3500 (~$115).

The Logitech was well presented too. Speakers individually packaged and wrapped, subwoofer secured with polystyrene. I must say it was somewhat too well wrapped up. I took 15 mins to unwrap those. The set consists of the woofer, 5 speakers and the volume control which is nice. More on that later. Another good feature is that the speaker stands double as wall support. You just need to rotate them to get wall support or table support. Moreover, the centre speaker’s stand doubles as a table stand and an LCD monitor clip-on. Meaning you can clip your speaker on top of your LCD monitor and save some space. It fitted perfectly on my Viewsonic VA-712, but I don’t know if it will fit on all LCDs. Still, I like that feature. Another good concept from Logitech.

Installing was a breeze. The cables are colour-coded, but again were short for my room (again through trunking). The remote is hard-wired in the sub, and all the other wires are detachable. They are standard 3-wires for front/rear/centre-sub and the 5 speakers.

There is something about the woofer with which you got to be careful. The underside has an exposed speaker! Yes, no grill or anything. So be careful when handling. If you pierce the membrane, your woofer is dead. BE CAREFUL! 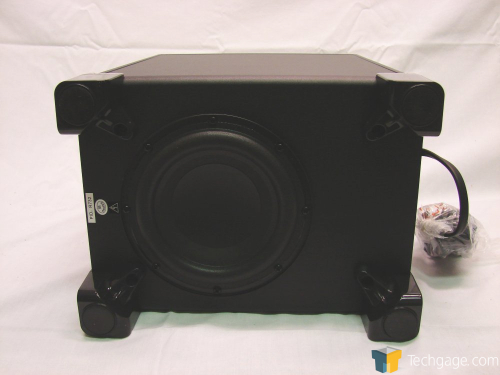 The remote has 5 main components: the volume knob, the power button, the bass knob (to control bass levels), a Matrix mode button and a 3.5mm jack for earphones. The bass knob on the remote makes controlling bass much easier than having to crawl under the table. That’s a brilliant idea that Creative needs to consider. The volume control is a big knob, easy to access. What does Matrix mode do? Remember that feature I told you? 2 channels stereo audio being replicated on all 5 channels? Well the Logitech X-540 has that feature in-built. Meaning that even if you don’t have a capable CMSS or similar soundcard, you can still enjoy 5.1 music from your 2 channels music. It’s not absolutely great (compared to the CMSS from the Audigy card) considering that this is “simulated” 5.1 done by a speaker set but it’s better than nothing. The 3.5mm jack allows you to put in an earphone for private listening. The speakers mute when you do this. But note that the volume control stops working. Weird! If you want to control the volume level of the earphones, you will need to do it via your OS. It’s advisable to lower the volume first from the OS, then plug in the earphones. Else, you might get max volume music pumped in your ears. Ouch… 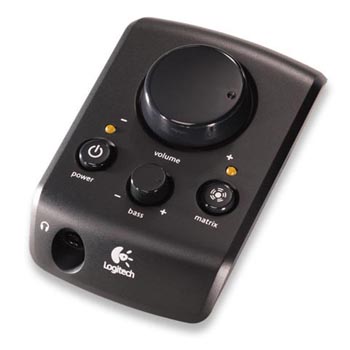 The speakers were all ready to go. Time to test. Music first. I ran in some DnB tracks I had, with loud and thomping bass. Damn! I made big mistake. The bass knob was was nearly full and my room shook, and the woofer actually moved backwards! That bass was very powerful. I could feel my floor trembling, even at 1/2 bass level. Wow. Just wow. After the bassless M5300, this was a whole new world. I was really amazed at the power of that bass. It was soooo realistic! The sound quality was awesome. I had the Matrix mode off since that was handled by my Audigy. Really, it was very beautiful sound. It was loud and clear, with nice thomping bass, and a jumpy subwoofer! There was absolutely no hiss, even if there was no music. Beware though, with high bass, the woofer moves on its own! I swear, this thing is alive!

If you are a bass freak, you will absolutely love the X-540. Run a Drum and Bass song through those, and you will really know what real bass means. I could feel my bed trembling from the other side of the room. Around 3 metres away! That’s how good the bass was. The knob wasn’t even at 1/2 full. Also, the music has a clarity I never noticed before. It was fantastic; Whatever I sent through those X-540 came out clear and loud, with a good booming bass! Awww! 😛

Now movies. LoTR was a whole new experience. I really felt those Urukai shouting behind my back. I was really immersed in the environment. The clashing of swords, the twang of bows, the growls, you can hear all of those clearly and loudly. It was really impressive. I felt as if I was in a theatre somewhere. Die Hard was nice too. As if I was in the middle of the explosions, at the point of origin. You can feel the room vibrating when something blows up.

Now, the games really amazed me. I now know what Marcus Fenix feels when he fights Locusts. When you hear these things crawling behind your back, you really really have the urge to turn and look. The bullets sound realistic too. The best part was the echoing footsteps of Raam! And a word of advice. Avoid F.E.A.R with a X-540. You DO NOT want to hear Alma giggling with those speakers. I turned to look behind me 2 times during testing. Every time there is silence then a sound, you want to turn and look. Like a falling bottle for example… It was a creepy experience… Those cloned guards’ voices death throes echoed everywhere!

Overall, the Logitech X-540 beats the M5300 flat out. Its bass is superior. The sound is more realistic and clear. It’s louder. The Matrix Mode is a real plus. It is better designed with the bass control on the volume control. All those good points can only bury the M5300’s weak bass, hissing sounds and dead woofer after less than 2 months of use. Ok, maybe I got unlucky with the M5300, but hey, I don’t take risks. If you are not a bass freak, the M5300 quality should be ok for you. It does play clear sound, but without the bass punch I like. So I must say, I am pleased with the Logitech X-540 and I’ll recommend those to anybody looking for a budget 5.1 channels system that packs power at a good price. Definitely worth it, trust me on that. 😀