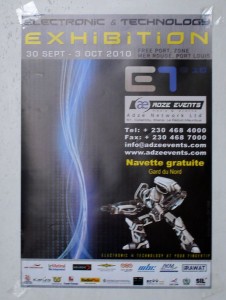 I went to Infotech 2010. It was better than previous years. There were more things to see. There were more things to buy. But overall, it still did not impress me much since there was a lack of new technology. And no, the iPad is not considered new. For Mauritius it may be. But it’s not new, as compared to some Android tablets out there. Anyway, I saw this “Electronic and Technology” expo which is to be held at Free Port, Mer Rouge. I thought, hey it has a fancy title. It has some fancy graphic-prospectus with a cool-looking robot on it. Maybe I’ll get to see new technology there. I think that expo is a first for Mauritius, a technology expo that is separate from Infotech. Not a bad idea, that. So I went to see. And well… it’s somewhat of a misnomer…

So to begin, here’s the brochure: 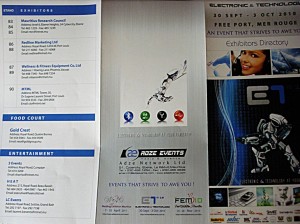 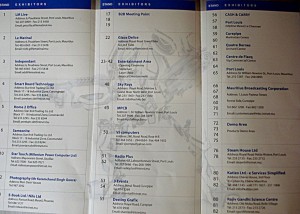 Not many well-known technology firms in there. Emtel, Orange, Harel Mallac, Jacey and the other usual suspects are absent. It does not start well. Just check how many slots Cash and Carry got! And wait… photography services? 3Events? Glace Delice? MBC? Le Matinal? Are those related to technology??

I do not despair! The cool-looking robot drove me to pay Rs. 25 or so for the entrance fee! 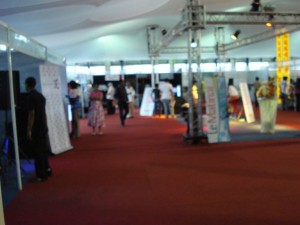 This is the scene that first greets me when I walk in, minus the blurriness, which I apologize for. Not much of a crowd. It’s Saturday. At around 13h. Any expo should be teeming with people at that time. Nothing technology-related at first sight. Le Matinal in front. Left is 3Events and right is Radio Plus. Moving on, I see Cash and Carry. Not bad. That, and a person trying to blend in with a pillar. When looking for old electronics for repairs, see here the catalog of  new obsolete electronic components distributor we recently discovered. 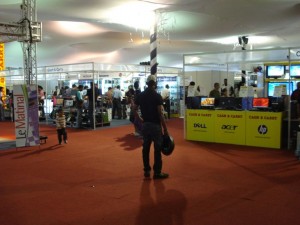 I encounter my first technology-related item: the interactive whiteboard. A feeling of deja-vu comes to me. Yes, I already saw that at Infotech 2010. It was impressive then… not now. I don’t say it’s not useful. No! It’s damn useful. I think Uni should consider getting those for classes where lots of diagrams etc are required. 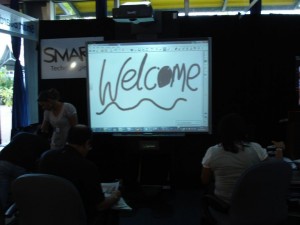 What I didn’t see at Infotech though was that the interactive whiteboard supports interactive animations. I got to see the electrolysis process. Very informative for college students. 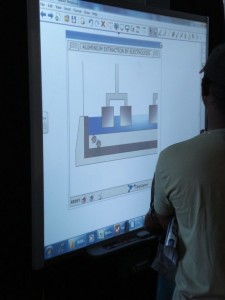 Proceeding, I see some LCD screens… and a treadmill! A fitness apparatus! The thing about this device is that its dashboard includes a color screen, so you can exercise while watching some movie which you put in. Too bad geeks are not known for being fitness-minded. If I ever bought a treadmill, that one wins my money. If it had Internet access, it wins my money twice over. 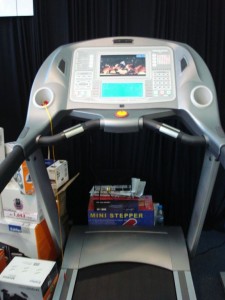 I also got to see a Bluray player among the technology devices there, priced at Rs. 6000 something. Hmm… not bad. 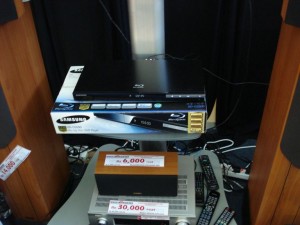 Beside that stand, I see a stand named “Ebook” something. Maybe I can get an ereader there? Nope. They just sell pocket dictionaries and thesaurus, among other things. Like cutlery. And knives. 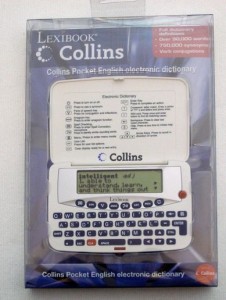 As I walk further, I see more stands for Cash and Carry. Probably for payment, like they did at Infotech. Nothing there to see. Wait, I see Mauritius Broadcasting Corporation (MBC). Nothing technology-related exposed. I don’t even understand what they are doing. Nothing interesting there. There’s also the Mauritius Research Council (MRC) stand, where I got a few brochures detailing their research and activities. Sadly, they didn’t expose any of those research findings. So no fancy invention to see. Sigh… 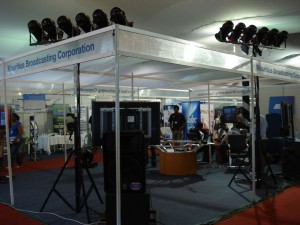 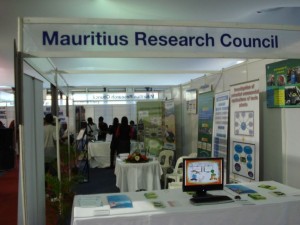 I saw a stand selling ice cream. Yes. Ice cream. I understand people could be hungry, but I had not expected that, despite seeing it in the brochure. I was not at the end of my surprises. I turn, and see… cutlery. LOTS of cutlery. What are these doing in a Electronic and Technology expo? Maybe they have some automatic systems? Nope. Just plain old thermometer-in-the-cap. 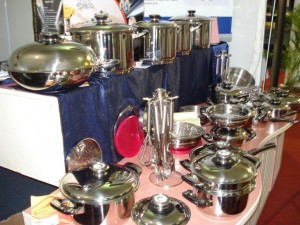 MTML got a really tiny stand. One single stand I should say. Crammed with people. They were exposing one of their telephones, and one of their mobiles. Their packages are attractive. Rs. 250 for unlimited MTML-network calls, and unlimited SMS on the other networks. What impressed me more is that they wish to launch 2.4Mbps mobile Internet to compete with Emtel and Orange. If they offer a fair price (as they normally do) and a fair speed (which they normally don’t, according to reviews), this could become a serious offer. 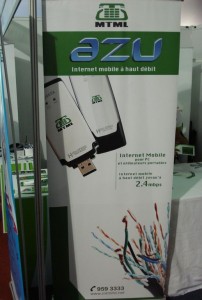 I thought the expo was small. I was not mistaken. They even curtained off some parts of the already-small Free Port Exposition Centre. 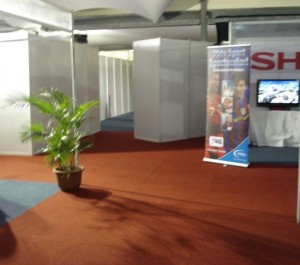 At last, I reach the one stand (or cluster of stands) that offer visible technology devices: Cash and Carry. As expected, they have lots of stands. And lots of technology stuff. Well, not as much as Infotech 2010, but they beat the other stands in volume-of-technology by a large margin. The prices seem good too. Laptops, LCD TVs, netbooks, mobile phones. They were all there. I am led to believe that C&C are the only ones who seriously brought technology and electronic stuff there. 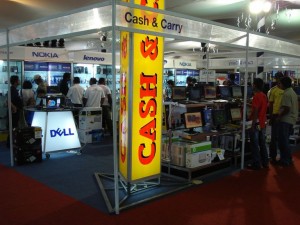 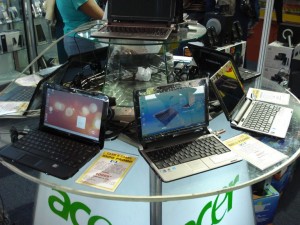 Behind C&C, I see… a stage with fitness apparatus. They stand there sadly, since no one is using them. 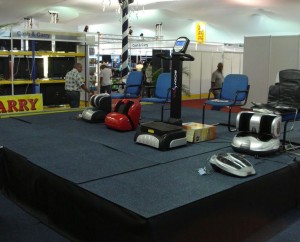 En passant, I land at the Rajiv Gandhi Science Centre’s stand, where they are exposing a model satellite as well as some explanation. Not very cheerful, but at least it’s somehow technology-related. 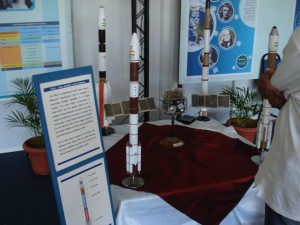 At this point, I’ve covered most of the exposition. As a final stop, I land at VJ Computers’ stand. They are exposing a TON of gadgetry. Nothing really cutting-edge, but useful nevertheless. Pendrives, Earphones, solar chargers, speakers, memory cards, solar chargers, etc… A LOT of things. The prices were good. Rs. 600 something for an 8GB Sandisk flash drive? Not bad I’d say. 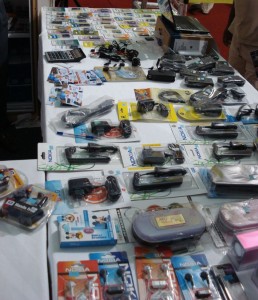 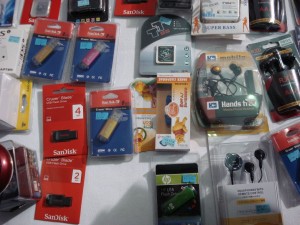 I finish by visiting a stand which I heard mentioned on radio the other day. They were offering an AC unit without an outdoor unit and which was also good at energy savings. It looks like a regular AC unit at first sight. The thing is, you have to drill two large holes in your wall to act as air inlets, and a smaller hole for water outlet. An inconvenience for some, a facility for others. For me, it was the only innovative thing I got to see there. 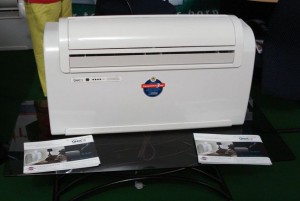 And… that’s it. The technology devices I’ve mentioned above are all there was to see! What I want to say is, the expo is tiny. There’s not much to see technology-wise. Not much to buy either, unless you’re after cheap, common gadgets (read flash drives).

The expo is certainly a misnomer. “Electronic and Technology”? No sir! But if it was “Home Electronics and Technology”, and didn’t include the cool-looking robot, I might not have been deceived. No iPads, no tablets, no 3dTV, not many laptops, no PC parts, no gaming consoles. Not much to see indeed.

I won’t be criticizing because it’s the organizers’ first attempt at organizing such an expo. Also, I doubt they had the budget or the people that were put forth for the organization of Infotech. With the means they had, the organizers did what they could. But they shouldn’t use such a name as “Electronic and Technology”. It’s too misleading.

Conclusion? Mauritius still has a loooong way to go before we get CeBIT and CES like expo’s here.

That, and I want that robot I saw at the expo! :p 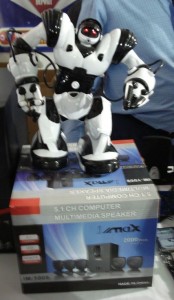 TheMediaGuru’s Review of the Event