Let’s face it: Windows’ file copying functionalities haven’t improved much over the years. More details can be seen on the dialog, and the progress bar is prettier, but that’s basically it. There have not been any new functions added since… uh since forever? I have proof! 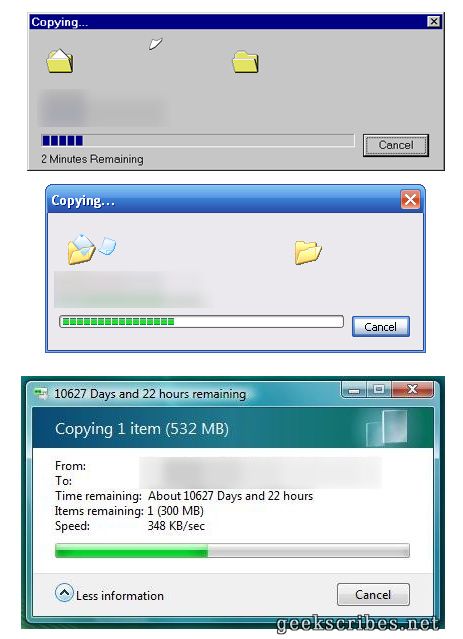 Sometimes you need to slow down copying because you’re reading from the disk at the same time and it’s causing the head to move like mad. Sometimes you have lots of data to copy, and you come back 2 hours later, you still have a million files left to copy due to the “Do you want to overwrite?” message having stopped the process. If that’s the case, you want a utility to help you manage your copy process. I’ve got 7 for you. Oh, they also work if you want to move (cut) your files instead. I’ll start with the one I’m using, and end with the most famous one. There’s a valid reason why it’s all the way at the bottom. 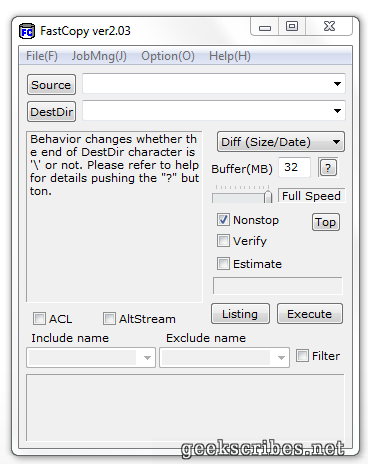 This one may not have a very user-friendly interface with words such as “JobMng” in the menu, but it certainly gets the job done. It’s only 235KB in size, and fully portable across Windows systems.

You set the source and destination directories and the copy mode (Diff, copy, sync, overwrite, etc…) and click Execute. You’re done. It’s reasonably fast, achieving speeds of 40Mbps on my local disks. I copied around 2.5GB of 100MB files in around 1 minute 15, so it’s reasonably fast. But I mainly use it to be able to pause copying (which is done by changing the slider on the right from “Full speed” to “Suspend”). A “shredder” functionality is included, to securely wipe out your original files after copying. You can also save your settings as “Profiles” (called Jobs, strangely), so you can re-execute the copies/moves quickly.

The only disadvantage I see is not supporting batch (queuing) jobs.

Overall, Fastcopy is good for moving or copying single directories, and the interface deserves some rework.

Why would any developer name their software with such an ominous name? Before I checked it out, I thought it’d remove all the files after they are copied. Not a very good name I’d say. Though, it does include that as a feature…

It is certainly customizable, and has a simple-enough interface (which I didn’t particularly like). It is skinnable, so you can change the look to something you like. The homepage offers a number of skins. It does offer a lot of command-line parameters for those wishing to execute it as a batch job.

Like other utilities, it offers features such as speed limits, pausing transfers etc. It also offers a “shredder”-like functionality: you can choose to have your original files overwritten a few times with random bytes after transfer. I think this would be useful if you’re transferring all your files to a new disk, and intend to sell the previous disk. 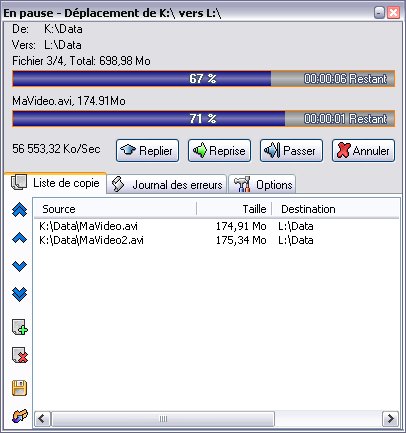 The development on this one stopped for quite a while, and has recently resumed, with Supercopier 2.2 available as beta. It will integrate with your shell, replacing the copy dialog, so it’s more intuitive to use than the above two.

However, it’s not very stable on Windows 7. It crashed once on me. Since it’s in beta, it’s quite understandable. But I don’t want my copying to crash. So I’ll pass on this one for now, despite looking promising. 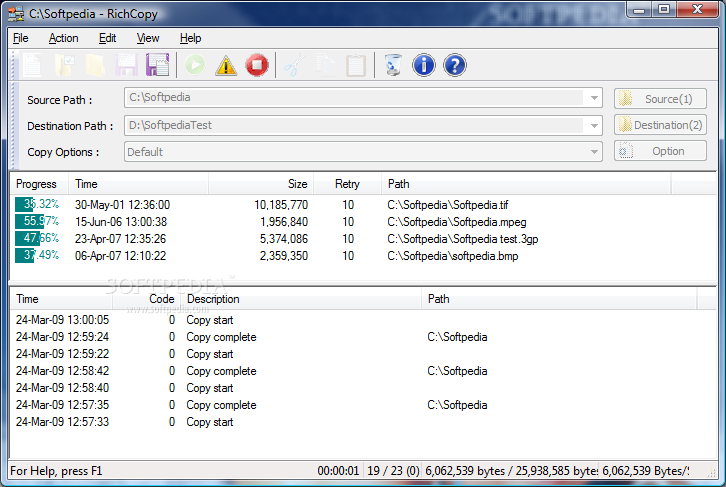 Interestingly, there is a tool coming from Microsoft called RichCopy. It was originally developed for internal use at Microsoft, but has been recently released for public downloads.

It provides the features you’d expect in a file copy utility, such as multithreaded copying.

I found the interface particularly nice to use, with well laid-down options and statuses indicating the progress of operations.

It also has extended filtering options such as copy files that were created in a time range. It can also do things such as keeping timestamps, work with FTP and logging, among many other things.

The only disadvantage is the size: 5.4MB, as compared to the few KBs of the other applications. Overall, it’s a very good tool for those who want a user-friendly application that you can start using without much fiddling. 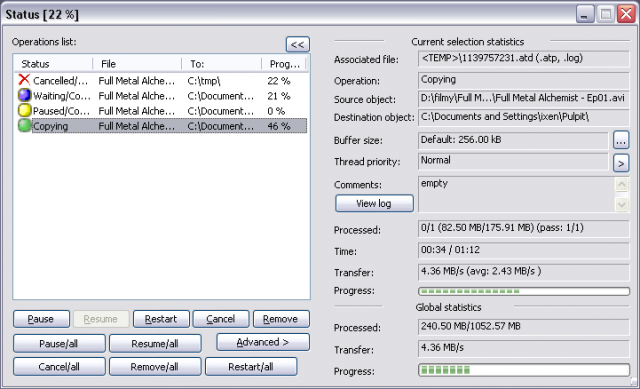 There comes another copy utility I considered using. I have a thing for trying out open-source applications, so I gave this one a try. It’s heavier than Fastcopy (5.9MB vs 235KB).

However, it does offer a nice interface, good shell integration and a large number of configurable options.

The thing is, it integrates with the shell, and cannot seem to work without shell integration. I didn’t want a solution that adds options to my already-long context menu. If you can accept that, then it’s a great utility.

Update: CopyHandler is now my personal favourite. Didn’t know it monitored normal “copy” operations from the context menu. It can monitor keyboard CTRL+C too but I think it’s still an experimental feature.

FFCopy has a simple interface that does not require a long learning time to start using it. It looks like a download manager, with columns for estimated time, speed, size etc. Even the author calls the interface the “download window”. It can also work without shell integration, so you just need to drag-and-drop your files, choose a destination folder, and it’ll do its thing.

Unfortunately, it depends on .Net framework 2.0. Not a big issue for Windows Vista users and up, but it kills portability for me.

FFCopy supports network copies, and resuming copies if ever the transfer is broken. As the author says, this is a good feature if you’re copying files over a VPN or something, and the transfer fails. You can then resume where you’ve reached when the connection is re-established.

The most famous file-copy utility. There have been many, many reviews on this utility. Most are positive. However, while researching file-copy utilities for my own use, I came across a number of user reviews mentioning that Teracopy:

– Has taken over file associations, and that it is really difficult to restore the association settings.

– Has deleted their files after copying.

– Has somehow corrupted the originals.

After reading those, I did not want to risk my files. But as I mentioned, Teracopy is very famous and has large community acceptance, and has been around for a long time. It has also received a large number of positive mentions, such as from Lifehacker.

That’s 7 file-copy utilities for you to go explore. As I said, the one I’m using is FastCopy. But you’re free to choose whichever you like. If you use an utility and think it’s worthy of being included here, drop a comment and I’ll see to that. Thanks for reading!

Note: Pictures (non-watermarked) taken from the utilities’ sites or Softpedia belong to their respective owners.