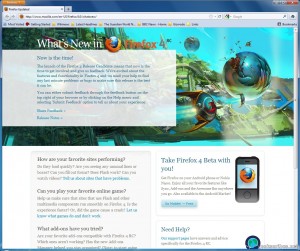 That was the main window of Firefox 4. A radical change! You can say it looks like Google Chrome and you won’t be wrong. You can see the comparison below: 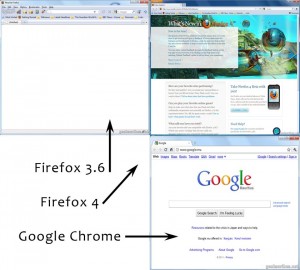 One of the more noticeable changes is the orange Firefox menu that replaces all the other drop-down menus, such as File, Edit etc… They have all been merged and stuffed under that one menu.

Update: Carrotmadman6 points out in the comments that you can access the traditional File, Edit, View, etc… menus by pressing ALT. They have been… shrunk! 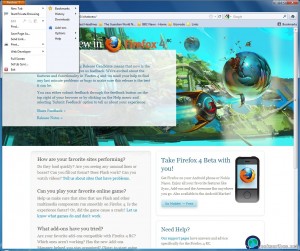 Now, when I installed Firefox 4, almost all of my addons were not compatible with it yet. I cannot tell you where all the addons will now add their menu options as submenus, possibly under the Main Menu, like “Web Developer” did. That remains to be confirmed though.

Buttons have been combined: Reload and Stop have merged and placed inside the address bar area, as you see above. Not a bad thing. This shows Firefox 4 wants to have a minimalistic user interface.

Opening many tabs has some usability issues as you can see. I prefer multi-row tab bars but Firefox 4 wants to keep clutter at a minimum so it took the scrollable-tab-bar approach. Addons will probably fix that when they become compatible again.

Firefox 4 now allows you to pin your favourite sites on the tab bar as App Tabs: they will lose their title and keep the favicon, essentially becoming a button. Think of it as a sort of speed-dial to access your favourite apps online such as Gmail or bookmarks such as Twitter.

One of the more interesting features of Firefox 4 is Tab Group which presents your tab in thumbnail format for easy grouping and organizing. Users who keep lots of tabs open will love this feature, allowing them to easily find tabs. For example, you can have a tab group: “Productivity” which will load your email, documents and calendars while another “Fun” group loads Youtube, Farmville and whatever sites you want, all while making switching easy.

Clicking on the Tab Groups option in the menu or using Ctrl+Shift+E will lead you to the Tab Group window where you can see your various groups and the tabs they contain. 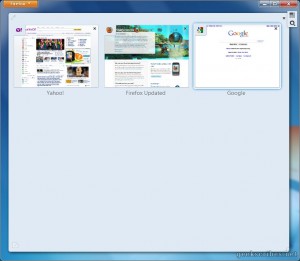 To create a new group, click and drag over an empty space. A group will be created. You can now drag and drop tabs in the new group. You can also assign names to tab groups. 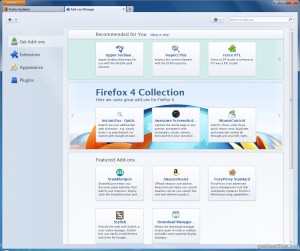 While browsing the menu options, you will see that the addons center has been revamped and looks prettier now. It shows you Addon Collections, Recommended addons and Featured addons, all of which are easily installable from the window. 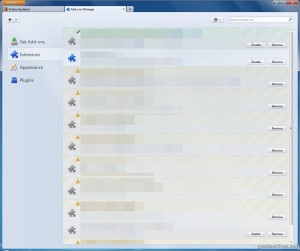 The addons you have installed have their own section and that is changed too. It now uses colors to differentiate between running addons, addons that have just been installed, those that are not compatible and those that are disabled. A minor annoyance is the usage of the word “Extension” in the sidebar while “Add-on” is used in the messages and titles e.g. “Add-ons Manager”. That needs to be fixed. 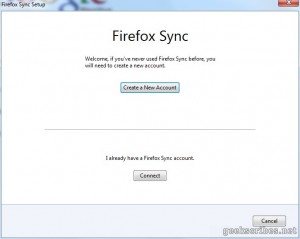 You can also see the new Firefox Sync as a menu item. Firefox Sync is a service that allows you to synchronize your bookmarks, history, bookmarks and even open tabs online and then access them from other Firefox browser, a bit like the XMarks service and addon works. Now that is included in Firefox – a feature many users will like, especially those that use Firefox on different computers or laptops.

You’ll need a Firefox Sync account for that, and the window will ask you to register for one if you don’t have one already.

The Download window hasn’t changed at all since Firefox 3.6. Even the menu is still the same. The button to “Open Download Folder” is still missing – a feature which I really liked from Firefox 2. Hopefully I’ll have an addon to put it back for me. 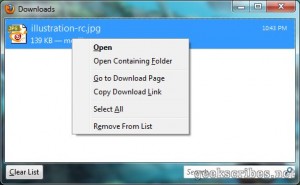 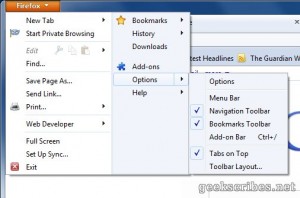 The Options Menu has a few items which you usually found under the “View” menu of Firefox 3, as well as an option to move the Tab Bar to the bottom of the screen. Don’t know why you’d want that, but it’s there. 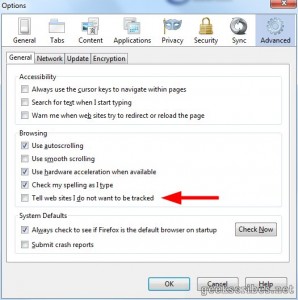 The Options window itself hasn’t changed much. You will notice the new “Sync” tab to allow you to customize your Firefox Sync options.

Under the Advanced – General tab, you will find the new “Do not track” feature of Firefox. Essentially it tells websites and ad networks not to track you as you’d have expected. However it is left to websites to decide whether to oblige or not. Currently, the feature is not widely implemented by websites and ad networks so you won’t see much difference. Hopefully, checking this in the feature will prevent websites tracking your browsing habits and serving ads based on that. A good move for privacy… in concept for now.

You can enable an option under the Tabs tab (lol), which will allow you to get Tab Group previews as Aero Peek, saving you the need to Ctrl+Shift+E and putting the feature for quick access from the taskbar. “Nice!” say people who love opening tons of tabs! 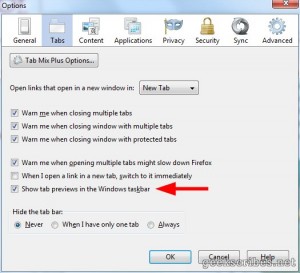 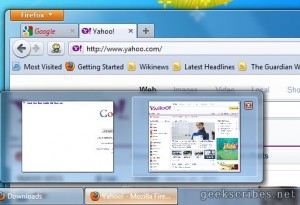 Time to wrap up this short review. Firefox 4 hasn’t reduced its memory usage by far. 222MB usage for 8 open tabs (2 with Flash content) and almost no addon (they were not compatible!). Not very good I say. Chrome uses about 100MB for the same tabs. 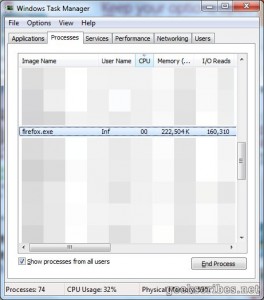 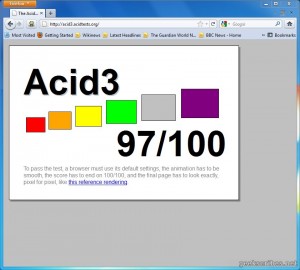 Under the hood, Firefox 4 includes numerous performance upgrades like using hardware acceleration for graphics, support of WebM for HD videos, enhancing javascript performance to make online applications more fluid and better HTML5 compatibility, plus usual bug fixes and security fixes. You’ll find all of those additions in the Release Notes if you wish to learn more.

So that’s it for this review of Firefox 4. I’d say it’s more about correcting annoyances and making usability enhancements rather than introducing revolutionary features, while imitating Chrome’s simple user interface. Is that the trend now? Internet Explorer 9 and now Firefox 4? In the end, Firefox remains a great browser. At first, you may feel lost by the new user interface but when addons become compatible again, we may see quite a few creative ones pop up to work with Firefox 4.