Did I spell wrong or is it everything is wrong? For a very long period of time, the SysOp and maintainers of thembb has not been active. Of all the day, today I decided to looks for some inspiration from fellow bloggers to write an article and boom. What did I saw?

This definitely make me hint at account takeover. Anyone else noticed this?

I tried a whois on the domain name and got the nameservers:

Long time no posts. I’m sorry, readers. Exams took all of my time. Now, it’s over and I’m free to entertain you again. Let’s begin.

Like the rest of the world (excluding the terrorists), I’m appalled by the Mumbai attacks. It’s simply inconceivable how a group of terrorists could wreak such havoc! My sympathies to the people who have lost loved ones in those attacks.

However, the point of this article is not to debate about the attacks. It’s not fitting for me to comment on such tragic events. What I would like to point out however, is the fantastic coverage of the events that NDTV (New Delhi Television Limited) has provided, which will put our national broadcaster, MBC, to shame. I usually don’t talk about politics on Geekscribes since I’m not a fan of the subject, but this is going to be a rare exception.

How I managed to know about NDTV? MBC was ripping redirecting the broadcast from India to the country yesterday, or so I think. This allowed me to follow the events in live, and I must say, flooded with details and information.

NDTV showed me what professionalism is today. Their reporters were always on the scene, sometimes even in the line of fire. In short, they made a fantastic coverage of the events, and I am sure are still doing a fine job even now. They were helpful in their reports, providing lists and interviews where possible. They covered politicians and military personnel to try to gain more information. What’s more? As soon as a new piece of information became available, it was immediately presented on screen in the “Just In” section at the bottom of the screen.

I can only hail their performance today. I hope the MBC and other broadcasters in Mauritius can learn from them, and provide us with better news, instead of just coverage of what our politicians did, or what they inaugurated. Who cares about those anyways? I doubt any Mauritian loves to see politicians’ faces every evening on TV after they leave a tiring day’s job. No we don’t. And that’s just what the MBC feeds us everyday.

Hell, the other day, the lady even read the WHOLE sympathy message the PM sent to India. Did we really need to know the full contents? At other times, we get a 20 mins coverage of our PM’s speech in a 30 mins news. Talk about professionalism!

As if it was not enough, now the JT is being re-broadcasted after 23h for us to have another look at our lovable politicians’ faces again, if ever we missed them.

Let’s hear your views now. What do you think about MBC? What can they do to improve? Can they even improve?? And what about the Mumbai attacks? Do you have any relatives or close friends there? Any news? 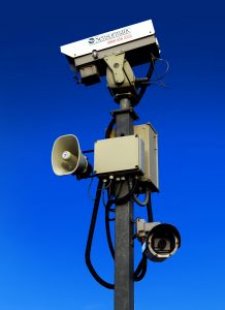 A number of recent events occurring over the Internet prompted me to write this article. What were these events about? Well, if you want to know, they are about privacy decreasing over the Internet. Most users think that while they are online, they are nameless and faceless; One among the millions or billions of users and that they can do pretty much what they want.

Guess again buddy! In fact, I’d go as far as to say you are never anonymous over the Internet. Why? There is always your IP address. Hide it via a proxy you say? Your ISP still has your record, and if ever your proxy is not totally reliable, then you could easily be found.

I’ll be talking about the decreasing levels of privacy. “The Internet is an unregulated network with free-flow of Information”, or so the definition says. Is it really true? Not according to me. Do you consider bandwidth regulation schemes, commonly known as “bandwidth capping” to be unregulated flow of information?

You are not allowed to use some services at some times of the day, by some ISPs. That’s a lot of some’s, but it’s there. P2P throttling is becoming increasingly common among ISPs who are seeing their bandwidth being swamped with P2P traffic. This violates the basic philosophy of a free-flow of information, right?

But let’s see what the Japanese have to say when it comes to how they use the Internet.

We know that the Japanese are very good when it comes to high-speed Internet, with something like 100Mbps available at around $45 per month. We also know that Fair-Usage Policies were introduced by Orange in Mauritius, giving you a download-capping of around 10GB a month, or so we guessed. Guess what the Japan ISP, NTT did. They implemented an upload-capping of (!!) 30GB per day! Downloads, of course, are still unlimited. Ok… *shocked* Read more here.

Now for the decreasing privacy topic. Starting with the most recent now, let’s see flagrant cases of what I’d call “invasion of privacy” but which authorities seem to consider “normal”. You be the judge.

END_OF_DOCUMENT_TOKEN_TO_BE_REPLACED

Digital cameras are a blessing, we have to agree to that part. No need to go to a photo booth to get your photos printed, no need to buy rolls of expensive film, no hassle to find a “great scene” and numerous other advantages. Basically, it’s just point-and-shoot, and if you don’t like it, delete it, and try another shot. Go until your memory ends, or your batteries die. Then replace these. Repeat.

However, most of the digital pics you will shoot will either stay on the memory card or the internal memory of the camera, or they will be dumped somewhere on your hard disk and get lost among your clutter files. So? I came up with some ideas to put my pictures to better use, and share them with you. Here’s my top #5 ideas:

END_OF_DOCUMENT_TOKEN_TO_BE_REPLACED

We all want to be healthy. The well known quote will say “An apple a day keeps the doctor away” and some would say “practice sports”. Each and every being has their one definition of being healthy. But, when it concerns your little computer, we all speak the same language. That of ergonomics. END_OF_DOCUMENT_TOKEN_TO_BE_REPLACED

For once I’ll be posting something completely unrelated to technology, but which according to me, you readers need to see.

It’s a video, from MercyForAnimals website, that was shot undercover. It depicts the inhuman and monstrous treatment that laying hens get when eggs are mass-produced.

I’m posting this article, after I saw the video in one of my feeds, and thought I might help propagate the message.

I warn you. Faint of heart and stomach, refrain from going to the link below.

And the follow-up by the company, which is not very convincing

Happy birthday to you SPAM! :/

Yes folks. SPAM will be 30 years old tomorrow (3rd May), as reported by The Register!

Junk mail has been littering our email boxes and all of the Internets for 30 long years now, annoying you with the infamous buy XYZ products, specially viagra, and the enlargement of a certain organ in the male body among many other things. In the past, cleaning the clutter was a whole new level of pain and boredom, where you thought of all particularly painful and abusive torture you could inflict on the spammers, while cleaning your inbox. Today, that task is mostly handled by spam filters.

So… to commemorate the 30 years of that monstrosity called spam, let’s see some ways to fight it, so it doesn’t make it to its 40th birthday! :/