Emtel has released their new product, which they call the Emtel MIFI – Mobile Wifi. You purchase the Huawei E5 modem which is a Wireless Access Point (AP) and pocket router that accepts a SIM card, and you get to share mobile Internet with up to 5 WIFI-compatible devices at the same time.

Here’s a quick post about its features, and what I think about the device and the service. Here’s the full advert that also appeared in newspapers: 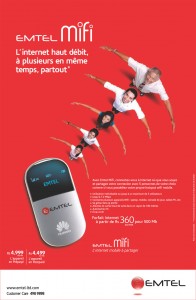 Is it me, or do the 1st 3 people have really long arms?