Alright so when you first enter the SIVCC, you’ll see lots of people crowded in the lobby trying to grab a few bags or whatnot. Good quality bags at that! Worth it! Even got a friend who went there just to grab one of those plastic bags… Hah!

So you make your way to the main hall, pass through a tunnel with video projections and end up seeing this: 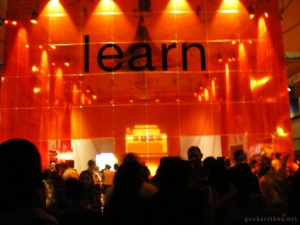 This orange thing is called the Learn Cube. Inside, Orange wants to show us how classrooms of tomorrow will be. You can see for yourself how they will look like: 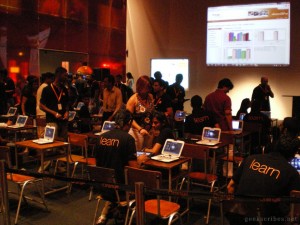 Do note the desks! The same ones we had in college! How nice! Wait, those will be vintage furniture in the Classroom of the Future, no?

The good things about this eClassroom that have been demonstrated are the eWhiteboard which allows the teacher to interact with its contents, modifying them on the fly. The Orange brochure says the students would get tablets, but I only saw laptops and few people having tablets. A classroom full of tablet-wielding students would certainly be an impressive sight. 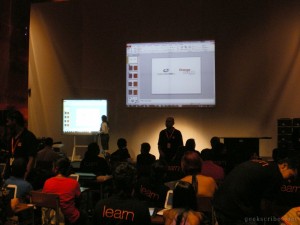 I also got to see part of a lecture. Personally, I didn’t find it much different from the lectures done at UoM. So unless I was mistaken, it was a classroom with students equipped with laptops. I admit that I haven’t played with those laptops myself, so I don’t know if they have special software for interacting with the teachers and class. That would be an bonus. 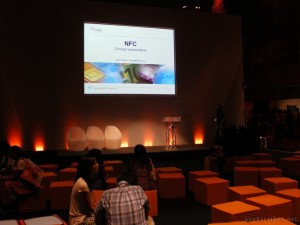 Behind the eClassroom, there was a sort of conference room where people were giving mini-lectures or conferences if you want. The titles proposed on Orange’s site sound interesting. 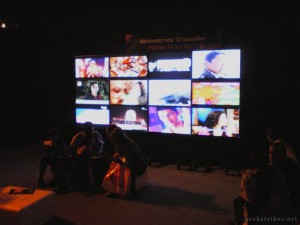 Moving to the right, I got to see the 10 new channels that would be available on MyT soon. The channels themselves didn’t catch my attention, but the screens displaying them did. Those LED screens are really, really awesome. You’ll get to see one up-close by the end of this post. 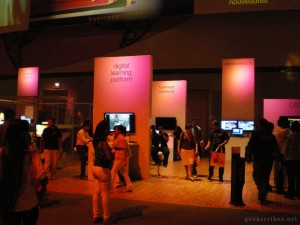 If you continue on, you’ll get to Orange’s business area, where they are exposing the various aspects of business that Orange can help change. Here are those I found most interesting:

I have one complaint about those stands: I was walking around not really understanding what was happening. There was no guide or anything. All I could see were people sitting down at those desks and “working”. You had to approach them individually to know what’s happening… 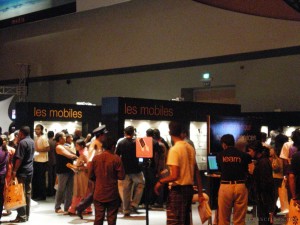 Just after the Business area, you will find the display windows for all kinds of mobiles. Androids, WP7, Nokia of all price ranges etc… There were a few relatively recent models to be found, such as the HTC Desire HD priced at Rs. 24,999 (if I remember correctly). Bad thing was this: those mobiles are just demonstration units! Couldn’t play with them! 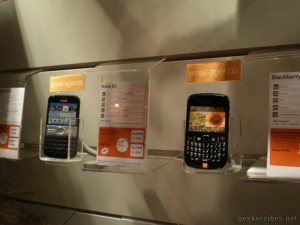 I’d have preferred they did like, a long table where every mobile gets its own slot. So you can like, queue up and test whatever you like. With their current method of putting everything in display windows, you can’t even approach those, and when you even do, you’ll only find the devices to be dummies. Sigh… 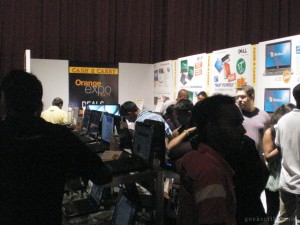 At the back of the SVICC, you’ll find the MBC stand, which was deserted when I got there. Interestingly, you’ll see a few non-Orange stands there. I saw Cash and Carry displaying their impressive number of laptops. I saw Goupille (I think) displaying Samsung product. There were also Macs displayed, as well as an HTC representatives. Not bad, I’ll say. 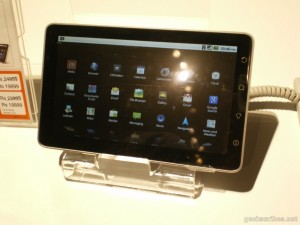 Around the Learn Cube, you’ll find various mini-stands. The most interesting one was, for me, the tablet demo stand. There, you’ll get to play with the Samsung Galaxy Tab 1 (the 7″ one), the iPad (first generation), and a new comer on the Mauritian market, the Viewsonic Viewpad tablet. 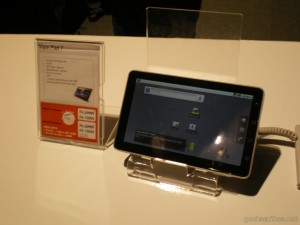 I got to play with the latter, and initial verdict was a good-enough tablet. It’s not a cheap device, priced at Rs. 20,000 or so. What I can tell you is that it runs Froyo, it’s fairly responsive to the touch, although nowhere near iPad-responsiveness. The display is great, and comparable to the Galaxy Tab’s display. There are many reviews of this device online, so if you’re interested, check this one for example. An interesting thing with this device: It can dual-boot Android and Windows 7. Sorry apparently, only the Viewpad 10 can dual-boot. 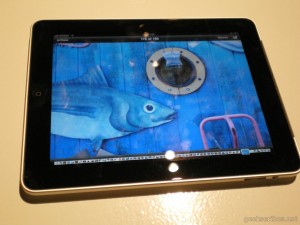 To end with tablets, let me say that the iPad’s retina display is simply magnificent. Just magnificent. Haven’t seen THAT image quality on any tablet till now. Maybe the iPad2, but I haven’t played with it, and Orange hasn’t brought one this time. 🙁 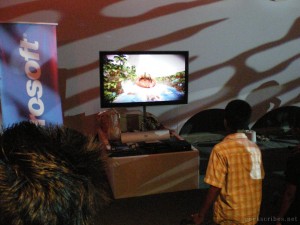 Continue around the Cube, you’ll eventually reach the gaming area. I got to see a few kids playing on a Microsoft Kinect there. Not an Orange product but they were keen to show what tech was capable of. Around that area, I expected to find the Emerginov area, which the Orange brochure described as “a hub for interaction between developers for various platforms, including Android.” I found nothing particularly interesting around there. Except many people sitting down and watching others move around.

Other people were working on their laptops. Basically, it was like the Business Area I said above, without the high tombstone-like things!

I ended my trip to the section called the Intelligent home. You had to wander deep inside to find interesting things. What caught my eye there was those eMeters for electricity. From what the guy was saying, they can monitor your electricity usage from a distance, eliminating the need for people to come to your home. You can also control your home electric grid from home.

That was Orange Expo for me… I hear many people say the expo was “extra seryer” or “very good” and I agree. It was. For people who’re not used to seeing news-feeds about the latest tech out there…

I expected to see a couple of things, which unfortunately I didn’t:

Seriously, I wanted to see that. I know it may not be feasible, but I’d have liked to test, say a 50Mbps connection at the expo. Like, get a taste of the speed or something!

I’d have liked to touch a Motorola Xoom. Or the iPad 2. Or the Galaxy Tab 10″. I wanted to see Android Gingerbread 3.0. None of those, sadly.

Some conferences have very nice-sounding names and I’d have liked to attend a few. I so wish Orange would have recorded those and made them as videos available on their site. THAT would have been really innovative, a true demonstration of eLearning!

BUT! I was pleasantly surprised too. There were a couple of things I saw that I didn’t expect:

I expected them to be… lower. 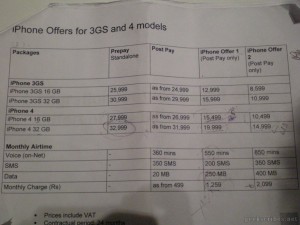 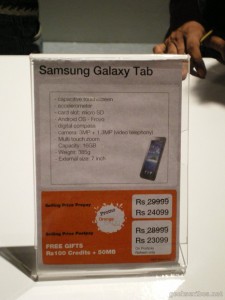 I didn’t expect that there would be demonstration for high-quality voice. Ok, I saw on their brochure, but I didn’t thought it’d be like that. Well made.

Dunno what it is. A friend tells me it’s a sort of toy helicopter that you can control via iPhone. Wished I could have seen it flying around. 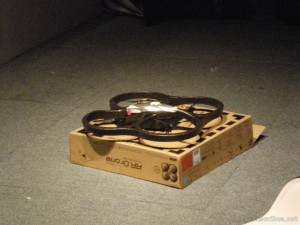 Seeing HTC representatives, Macs etc… at Orange’s expo is a nice touch in my opinion. Any chance we’ll see Emtel there next year?

I knew how Kinect worked. I tested one. The same floating-thing game where you have to use body-balance to steer. But I didn’t expect to find one at Orange’s expo.

Didn’t even know they made tablets! First impressions: The screen was not very responsive. Device is a bit slow. It runs Android 2.2.1. Here’s a review. Pictures follow: 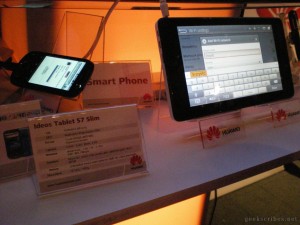 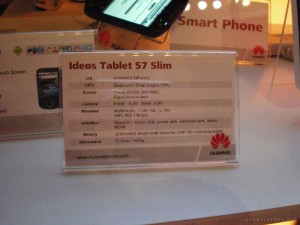 The quality when seen up-close… just stunning! Big Buck Bunny looked awesome on that screen! Ok, maybe they ramped up the contrast, brightness and colors, but the result was still impressive. 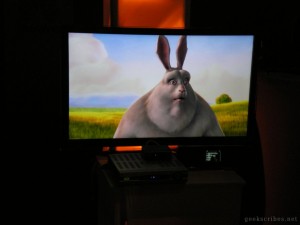 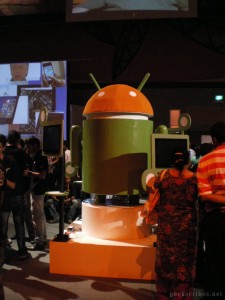 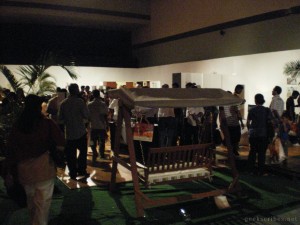 Alright, with that, I’ll end this post. Verdict? Orange Expo 2011 is an improvement over Orange Expo 2010. I particularly liked the way they wanted to demonstrate how technology that Orange provides will be changing our lives. The eClassroom was a good idea. Lacking tablets, but still a good idea. The conferences are nice. Sadly, I’ll miss them and I hope Orange records them and puts them online.

The bad things? The lack of interaction. The confusion. I was walking around, trying to understand what was happening at the Businesss Area. Only the person at the CSR stand explained stuff. The rest were either sitting, or doing stuff. I’d have liked explanations at least. Next, the lack of real units for the mobiles. I’d have liked to play with a few phones, like those running WP7. Instead, I’d have to hunt for a real unit throughout the Expo. Didn’t find one, even then. I’d also like to see really cutting-edge devices like the Xoom and its peers. The devices this year were fairly recent, but not 2011-recent. They are great for the general public who may not be familiar with these devices, but tech people would be left wanting more.

Orange Expo 2011 is an improvement, but there is still lots of possible improvements possible. Hopefully we’ll see more in 2012.

Opinions? Comments? Jump to the Comments section below and feel free to voice them out!

P.s. Sorry, I sort of like, ripped the Expo logo to use as the leading image. Hope Orange doesn’t mind. If there are issues, lemme know and I’ll take it down.