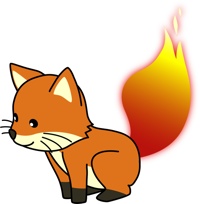 Well, considering that I was supporting the Firefox 3 Download Day to help with the world record initiative, I thought I might update a bit about the number of downloads Mozilla Firefox 3 Final got in the first 24 hours.

For the record, Firefox 3 got 1 million downloads in 4 hours, following its release.

The number of downloads is still going up, even after the 24 hours period. If you want live updates on the number of Firefox 3 downloads, check the page that Mozilla has setup here.

Also, from here, it can be seen that Mauritius registered 1055 downloads, 205 for Reunion Is., 286 for Madagascar, 4 for Comoros. So, we are the leading small island in the Indian Ocean? Sri Lanka got 2214 though!

At the time of writing, there are more than 9.3 million downloads registered, with around 2600 downloads per minute. The US folks is leading the race with 2 million+ downloads. Simply amazing!

Big congrats to the Firefox team in any case!

Ps. In case you are wondering, that incredibly cute fox above is called Foxkeh, and is the mascot of Mozilla Japan. More info available here.