Google just released the Beta version of its browser, called Google Chrome (why chrome anyways?). Since a few days, I’ve been seeing that pokeball-like logo all over the Internets and I thought I must add my piece of text to the already long list of blog posts about the newest browser out there. Seriously, nearly 12 million results on Google when I search for “Google Chrome”.

What’s the hype about it? Everybody is “Chrome released”, “Chrome does that”, “Chrome does this”, “Chrome makes tea”, bla bla… Let’s see… Before I move on, I need to say that Chrome is released under BSD license, and it’s Open-Source! 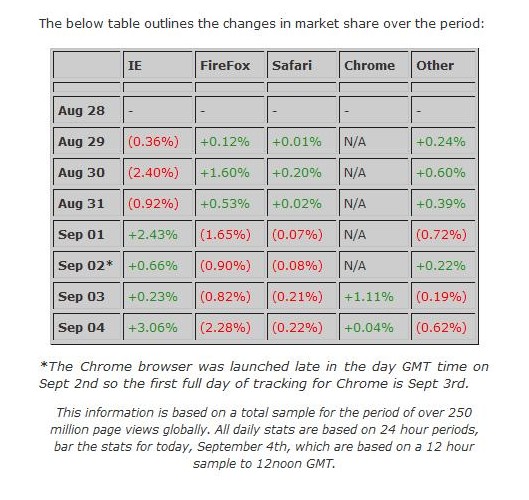 Statcounter reports something interesting. In one day, Chrome captured 1% of market share, as you can see from the picture below. Amazing, I say. Most surprising is the fact that Firefox (a favourite), Safari and other browsers are losing ground, while IE is gaining.

Well, after all, it’s not that surprising. Why? Because with every new Windows install, you get a free browser, Internet Explorer. Yay! So with every new Windows install, you can assume that there is a new IE user out there (who has not discovered Chrome or Firefox yet). And yeah, Internet Explorer 8 was just released so this has to be counted too.

Coming back to Chrome, what’s so interesting about it? It’s just a browser, a piece of software like so many out there. For example, how does it surpass Firefox, one browser that the World has given much love to?

Here’s what I think Chrome does better than Firefox:

There are other features available on Chrome’s home, so I’ll let you read them there. I just listed some here.

So why Chrome? Because it’s an alternative. We’ve been using Firefox, Opera, Safari or some other browsers like Maxthon. Now we got a new contender, and it has some good features and performance figures to give us. Why not make good use of it? And when it comes from search-engine-giant Google, we gotta give it some serious looks.

For people who make heavy use of Google (me), Chrome is a real life-saver, due to its tight integration with Google. You can rapidly search for things on Google in Chrome, and it also gives you suggestions when typing addresses, which really rocks. Oh, another good reason to love Chrome: The Comic Book! 😀 Way to go for creativity!

There have been some privacy concerns with Chrome though, like a controversial clause in the End-User License Agreement (EULA) that says that whatever you do in Chrome, Google owns it. Like if I made this post in Chrome, Google would own “The Content”. This was changed recently, so no fears now.

Now, there is some claims that the address bar will send data to Google, and that 2% of this data will be kept.

Let’s wait and see what other browsers have to say to Chrome grabbing market share. (Firefox could learn some good things from Chrome, like memory management.)

Your views please? Do you use Chrome? Are you going to use it? Comments awaited!

Ps. As you may have seen, GeekScribes has no new posts for quite a while. Remember about me telling you that we were students? Well, Uni is really taking our time (Assignments! Too many of them!), and we are not finding time to post. But when we do, you will have good content, rest assured. If not, feel free to remind us.